In recent years, China has showered Cambodia with aid and investment after Prime Minister Hun Sen’s government acted in its interests, but observers say Phnom Penh must do more to ensure the country does not succumb to Beijing’s influence.

The 20 were subsequently prosecuted for their alleged involvement in the violence as part of a bid by Chinese authorities to crack down on what they say is separatism and terrorism in the region.

One day after the deportation, which went ahead despite an outcry by international rights groups, China’s then-Vice President Xi Jinping offered Cambodia concessional loans and grants totaling U.S. $1.2 billion. The package made China the biggest foreign donor to Cambodia.

In July 2010, China erased more than U.S. $4 million in loans to Cambodia that had been provided to the Khmer Rouge during the Democratic Kampuchea era of the late 1970s. The move came immediately after Hun Sen requested that the U.S. cancel more than U.S. $400 million borrowed during the Khmer Republic of the early 1970s, but received no response. In March 2012, ahead of Cambodia hosting an annual meeting of foreign ministers from the 10-member Association of Southeast Asian Nations (ASEAN) bloc, China’s then-Premier Hu Jintao visited Phnom Penh and pledged to provide U.S. $40 million in grants and U.S. $30 million in loans.

During the visit, Hun Sen requested that China provide Cambodia with annual loans of U.S. $300-500 million for the development of infrastructure, irrigation and electricity.

The two leaders agreed to set goals to increase bilateral trade two-fold to U.S. $5 billion by 2017, while China promised to support Cambodia’s bid to be a rotating member of the United Nations Security Council. Cambodia in turn agreed to keep a thorny regional dispute over territory in the South China Sea off the table at the upcoming July ASEAN meeting.

By May 2012, Beijing signed an agreement providing assistance worth U.S. $20 million to Phnom Penh for the construction of a military hospital and institute, and promised to take an increasing number of military officers from Cambodia for training in China. One month later, China provided Cambodia with a loan of U.S. $430 million.

The July 2012 ASEAN meeting in Phnom Penh failed to issue a customary joint statement at its conclusion and some ASEAN diplomats charged that Cambodia had been influenced by China not to incorporate in the statement the views of four ASEAN member states in disputes with Beijing over islands and reefs in the South China Sea, causing an impasse on an issue that would only continue to become more serious in the following years.

China has since become the largest foreign investor in Cambodia, spending U.S. $2.9 billion in 2013, up from U.S. $59 million a decade earlier.

Most investments focus on mining, infrastructure and hydroelectric dams—controversial projects that face criticism in Cambodia for negatively impacting people’s livelihoods and the environment.

Andrew Mertha, a political scientist with Cornell University who has written extensively on Beijing’s assistance to the Khmer Rouge, told RFA’s Khmer Service that Chinese investments in Cambodia must be held to greater accountability for how they affect the country.

“The effects of … commodity economies of scale that China’s engaging in on Cambodian soil … might be difficult for Cambodia to get out from underneath if things get bad or if Cambodia becomes too dependent on China,” he said.

“That is something that worries me a great deal.” 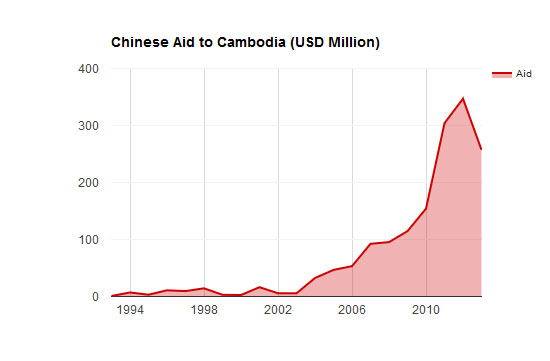 Source: The Council for the Development of Cambodia (CDC)Hong Vannak, an expert on Sino-Cambodian relations with Cambodia’s Royal Academy, said Hun Sen’s government benefits significantly from Chinese-led investment projects, which typically proceed much faster than projects done in collaboration with international lending organizations.

“Upon agreement, China immediately begins a project while at the same time working to resolve issues that arise from its impact—thus, the projects produce results quickly,” he said.

“Similar infrastructure development projects from the Asian Development Bank (ADB) or the World Bank take too long to complete. Sometimes, not even three years is enough just to resolve the problems.”

But he cautioned that the government must do more to ensure the Chinese projects abide by Cambodia’s laws.

“If Chinese investors properly abide by the rules and regulations of Cambodia—by paying taxes and adhering to other procedures—this is beneficial to Cambodia’s economy,” he said.

“But if they are able to cheat, it is due to weak leadership on the part of Cambodia. If we … allow anything to slip through the cracks, it is certainly our fault.”

While Cambodia may benefit from Chinese investment and aid, observers have questioned whether Hun Sen is capable of preventing Beijing’s influence from becoming too strong on his country’s politics.

Cornell’s Mertha told RFA that he considers the prime minister to be a shrewd power broker, but wonders whether others within his government will undermine him.

"I think Hun Sen … is a much smarter politician than the leaders in many of these [other] countries [that China invests in and provides aid to], and so I think he's going to keep China at arms length when he needs to," he said.

“The question is: Is that going to be enough? Is he able to do that, given China's might, as well as the way in which China might be able to buy off other people within the government [and] within Cambodia’s economy? And that's an open question.”